When the fellows launched HANGATYR in spring 2006, the stylistic direction of the idealists from Saxony and Central Thuringia was immediately clear:cold, Nordic guitar riffs, paired with typical Thuringian melodies and German lyrics, inspired by the mythology that lives deep inside the creators, should shape the music.
The inspiring band name pays tribute to Odin, the father of the gods – ‚Hangatyr‘ is its epithet in the rune’s song. He sacrificed himself and hung on the world ash Yggdrasil for nine days to learn the runes. HANGATYR see the meaning behind this in that you have to give something to gain knowledge and wisdom.

[ Pic: Ute Ruhmann ]
LINE-UP:Silvio • VocalsAli • GuitarBasti • GuitarMicha • Drums
By autumn 2007, the musicians had been working on the songs for the very first self-titled demo CD, which was produced with complete self-energy. A start was made, a brand was set.
Before the recordings for the debut album „Helwege“ could begin, the drum stool had to be occupied in the truest sense of the word. With Michael, a dedicated drummer could be found quickly, who was ready to record in the studio after a short period of familiarization. At the end of February 2010 the time had come: the outstanding „Helwege“ could be released.
In the following time, various guest performances were celebrated on suitable stages and further ideas for new songs were collected. HANGATYR set out well prepared in April 2012 to record the album successor „Elements“. In February 2013, the last fragments were put together. Alexander Dietz, known from Heaven Shall Burn, mastered the material in his Chemical Burn Studios. In early 2014 the disc was thrown into the scene.
HANGATYR, motivated even more by increasing encouragement and recognition in the genre, continued to pursue their very own vision of violently-biting but firm Black Metal with a clear focus.
The common path separated in 2017 when founding member Tele and long-time companion Marco left the group. In the same year Basti offered to get on the guitar, which turned out to be a real stroke of luck. His dedication and the experience he brought with him gave HANGATYR a different soundscape. 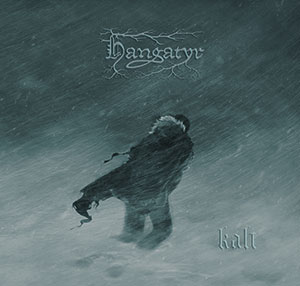 [ Cover art: Ute Ruhmann ]
TRACKS:01. Niedergang 06:2002. Entferntes Ich 06:3503. Firnheim 07:2204. Blick aus Eis 04:2405. Kalter Grund 06:1906. …kalt 02:0507. Mittwinter 07:5208. Verweht 07:05
total: 48:13 min.
In October 2019, the route once again led to Chemical Burn Studios in Bad Kösen. Together with Alexander Dietz, the new compositions were refined, which can now be heard on „kalt“:relentlessly hard-hitting, uncompromising BLACK METAL anthems, from which the eternal spirit of the old and the true proudly emerges.
For example, it is lasting impressive and close to nature to experience how fatal the fervent outbreak „Cold Ground“ penetrates under the skin. Because also in terms of lyrics, those involved in the publication stand together for timeless depth – in this sense, a captivating concept was developed for „kalt“. In principle, the album is all about the oppressive cold that arises when you have to suffer painful loss.
Official Preview for „kalt“:
With „kalt“, HANGATYR offer substantial Black Metal. Songs of pure power, inspired by darkness and spirituality, which rise so imposingly that often a real feeling of triumph arises, which in the end wants to despair of icy loneliness. (Markus Eck)
DISCOGRAPHY:2010 • Helwege (Full-length)2014 • Elemente (Full-length)2020 • kalt (Full-length)